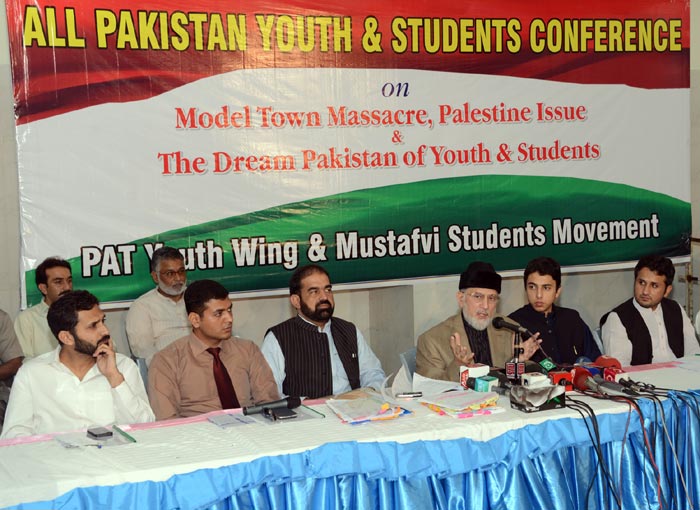 All-Pakistan Students and Youth Conference was held on Tuesday under the banner of PAT Student and Youth Wing in the central secretariat in Model Town, which was attended by representatives of all youth organizations and student bodies from across Pakistan.

Dr Qadri made it clear that an honest, credible, competent and courageous leadership was required to unify the disparate Muslim world that could play the role of a bridge and gather the international community against demeaning oppression on Muslims. He said that Pakistan would lead the countries of the third world after revolution. He said that corrupt elements in bureaucracy and police would be replaced by educated youth in an attempt to enable them to take active part in the nation-building. He said that youths and students would be the front-runners in the struggle for putting Pakistan on the trajectory of socio-economic development after revolution. He asked the students to play the same role during this struggle to save Pakistan in the same manner and with the same passion with which they worked to establish Pakistan under the leadership of the Quaid-e-Azam.

Dr Tahir-ul-Qadri said that according to Article 5 of the Constitution, the social contract had broken down due to the rulers’ failure to confer rights to the masses. He said that the people would now kick out the rulers through revolution. He said that irrespective of whichever party the students belonged to, they could still play meaningful role in elimination of repression, corruption, state terrorism, barbarism and brutality from the country as a unified force. He urged them to perform their national duty to save Pakistan while remaining in their respective parties, adding that if they did so, they could become agent of change in national politics, which would augur well for the country.

Dr Qadri said that the Muslim world suffered from leadership crisis at the moment. He said that the Muslims needed a leadership that was honest and courageous to steer them out of raging crises they were stuck in. He said that democracy did not exist in the country, highlighting the fact that confining concept of democracy to merely holding polls was erroneous. He said that elections were merely a tool to put politicians in positions of power, adding that real test of a democracy was to deliver to meet expectations and aspirations of the electorate. He said that such a system of democracy would be introduced after revolution that would automatically throw out the corrupt elements out of power. President of Youth Wing Shoaib Tahir, Irfan Yousaf, Sunni Ittehad Council’s Arshad Munir Mustafai, Jamiat Talaba-e-Islam’s Abdul Hameed, and PML-Q’s Shahzad Mughal also addressed on the occasion.

The parties that attended the Student and Youth Convention included:

Joint declaration adopted at the Conference is as follows: