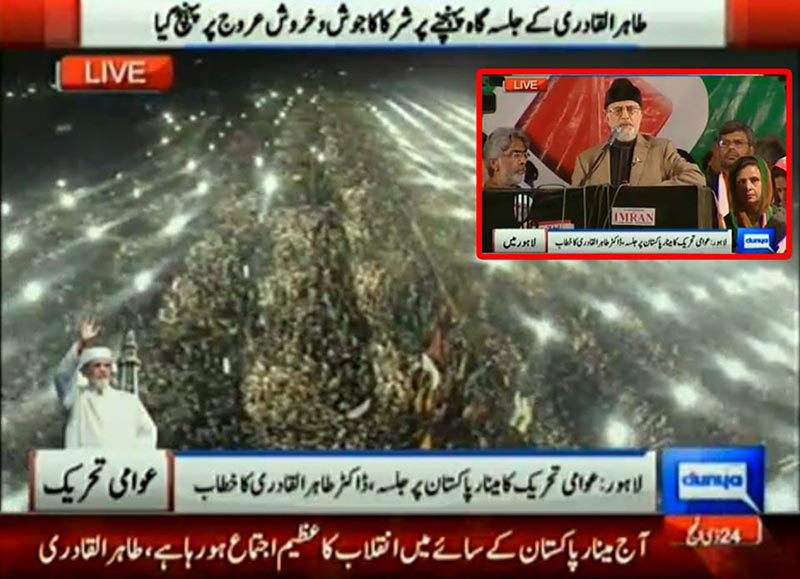 LAHORE: (Dunya News) – Pakistan Awami Tehreek (PAT) chief Dr. Tahirul Qadri has said that only retribution will settle the issue of Model Town incident martyrs. He said that this case will only be settled through hanging the culprits. Discarding the rumours circulating in media, Dr. Qadri said that ‘Diyat’ (compensation) will not be accepted for the martyrs. “Nobody will be allowed to become Raymond Davis”, said Tahirul Qadri.

Showing a newspaper clip during his speech, Tahirul Qadri said that Pakistan government imported thousands of tear-gas shells for dealing with PAT’s revolution march and sit-in. “I paid tribute to the martyrs of Model Town incident and D-Chowk martyrs”, said Dr. Qadri.

Dr. Tahirul Qadri said that Metro Bus was constructed at a cost of Rs. 30 billion according to Punjab government. He said that the same money could have been spent on providing clean drinking water to the people of Punjab. He said that contracts of cleaning the streets of Lahore, running buses and car-parking are being given to other Islamic countries. He said that it exposes the incompetence of the government. “These rulers are treating Pakistan like East India Company”, he said.

“Pakistan has seen socialism, capitalism and several other –isms. But now, only Quiad-ism will continue in Pakistan”, Dr. Tahirul Qadri said. He said that Pakistan has an excellent geo-strategic location. He said that China is the largest economy of the world, India is another emerging economic giant, Central Asian Republics (CAR) have technological strength while Iran is rich in natural resources. He said that Pakistan can become a great economic zone for all those countries as these countries need Pakistan for improving their trade.

PAT chief said that Pakistan will have to eradicate the menace of terrorism from its soil in order to provide the international community with a stable environment for investment. He said that security situation will be improved after the revolution.

“Then there are great tourists’ spots in Pakistan. Our Northern areas are extremely attractive for nature lovers. We have sacred places of Sikhism, Buddhism. We must use it for the sake of improving our economy”, said Tahirul Qadri.

Sharing his ten-point agenda at Minar-e-Pakistan Lahore for the poor, Tahirul Qadri said that people will be given all the basic necessities of life at low cost. He said that households having less than Rs. 15000 as monthly incomes will be given subsidy on basic necessities and will have exemption from all taxes. Free land will be provided to the farmers for cultivation. Women will be given economic security by providing them with jobs. Disparity among the salaries of government employees will be minimized. Poor will have free education and health treatment.

“Pakistan will be made a part of Shinghai Cooperation Organization (SCO), Great-20 (G20) and all the major economic alliances of the world. But this will only be possible if we are able to get this system of corruption eradicated from the face of this country”, said PAT chief. He said that he wanted to make Pakistan a country which the world will recognize. “Entire world will say that there is no Asia without Pakistan”, said Tahirul Qadri. He said that Pakistan will be turned into Hong Kong, United Arab Emirates (UAE) and South Korea of Asia.

Sharing his ten-point agenda at Minar-e-Pakistan Lahore for the poor, Tahirul Qadri said that people will be given all the basic necessities of life at low cost. He said that households having less than Rs. 15000 as monthly incomes will be given subsidy on basic necessities and will have exemption from all taxes. Free land will be provided to the farmers for cultivation. Women will be given economic security by providing them with jobs. Disparity among the salaries of government employees will be minimized. Poor will have free education and health treatment.

According to government’s own report, Pakistan’s requirement will be 35,000 MW by 2017 while all the government’s 9 projects combined will produce only 5094 MW, claimed Qadri. Instead of talking about their corruption in these projects I will instead provide solution to this problem, Dr. Qadri said. The solution is to devolve the power to smaller units. “I want to divide Punjab into 9 units”, he said. When smaller units will have administrative sovereignty, they will be able to use all their resources by themselves. This devolution of powers and power generation have strong correlation among them, Dr. Qadri said. He said that he will generate power by 12 different methods including solar, wind, hydro power generation projects.

Tahirul Qadri said that 25 MW projects will be installed on small canals in villages and towns. In this way, he claimed, he will solve the energy crisis. He said that India is working on Remote Village Lighting program and Pakistan should also work upon it. He said that biomass will also be used to generate electricity.

PAT chief said that those talking about democracy have no share for poor’s health in their GDP. He called for the residents of Lahore in particular and people of Pakistan in general to stand up for their rights. He said that there will be revolutionary sit-ins will be staged in every city of Pakistan. He said that that the entire economy is working on loans. He said that Pakistan has more than 6500 billion rupees loan.

Tahirul Qadri advised the PAT workers to start membership drive in every nook and corner of the country. He said that PAT wants a national government in the country before holding new elections but "if elections were imposed upon us, we shall not leave the ground open for them", said Qadri. 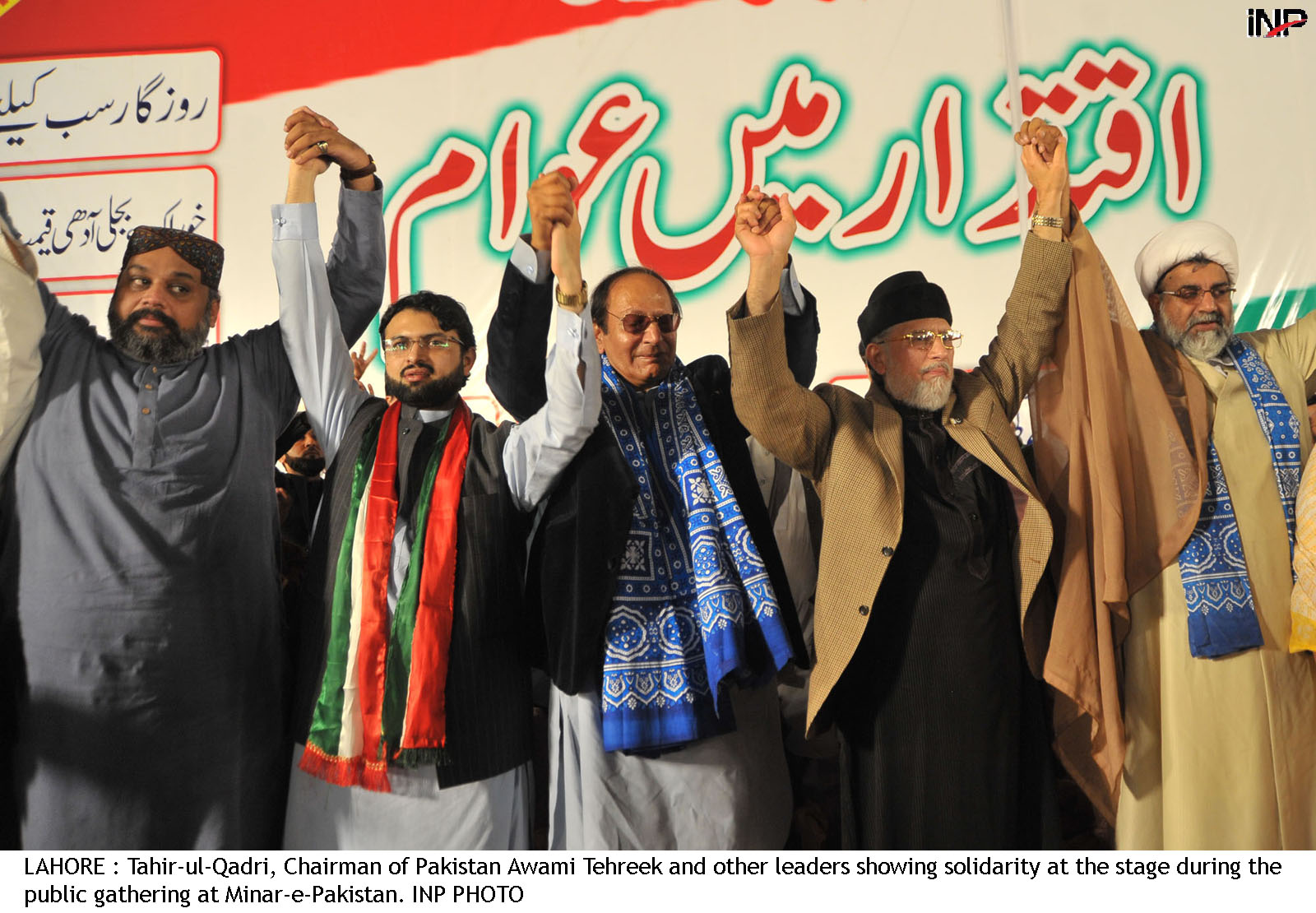 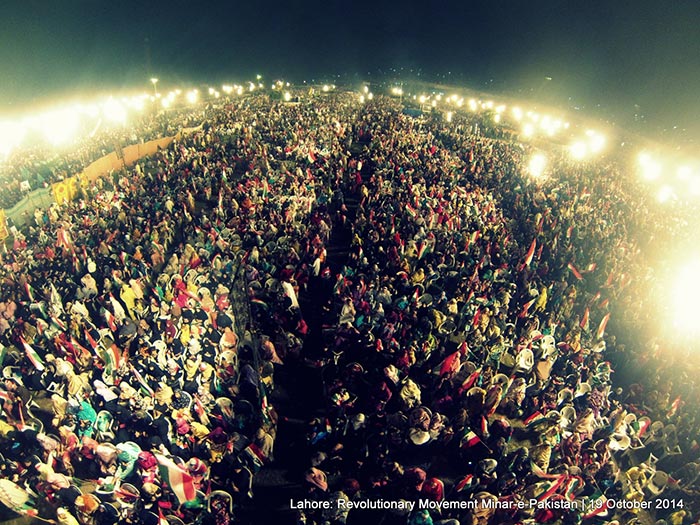 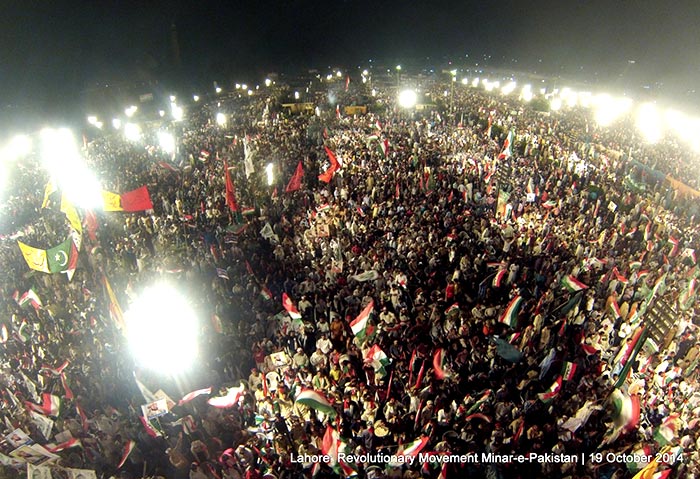 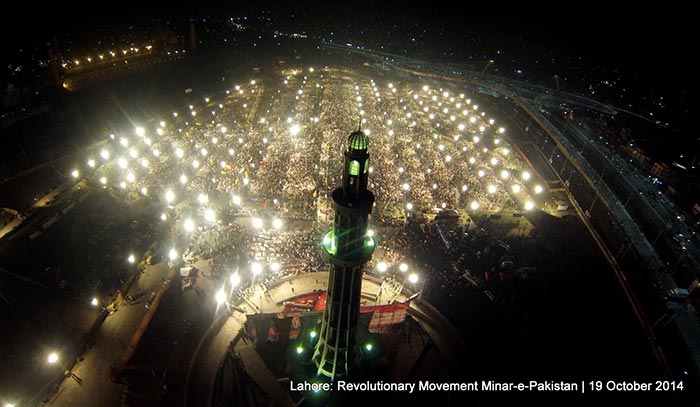