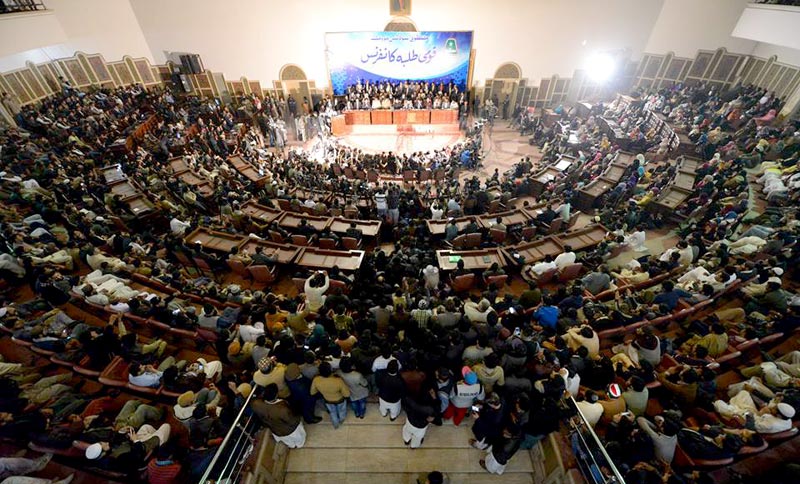 The Conference opened with the recitation from the Holy Quran followed by Naat. The proceedings of the programme were broadcast live through private television networks and www.Minhaj.tv. Rana Tajammul Hussain, Secretary General of MSM, presented the welcome address. Ch Irfan Yousaf, central president of MSM, said in his speech that Pakistan’s youth want revolution and riddance from the system of oppression. He said that MSM will take its struggle for elimination of terrorism and enforcement of uniform education to its logical conclusion under the leadership of Dr Muhammad Tahir-ul-Qadri. Mazhar Alvi, Saeed Alam, Gulshan Irshad, Ubaid Inqilabi from Gilgit-Baltistan, Tahir Khan from Sindh, Misbah Noor from KPK, Ansar Bashir Lone from Kashmir, Asghar Ali Shah from Balochistan, Zia-ur-Rehman from Northern Punjab, Asim Inqilabi and Ateeq Inqilabi from South Punjab spoke at the Conference. 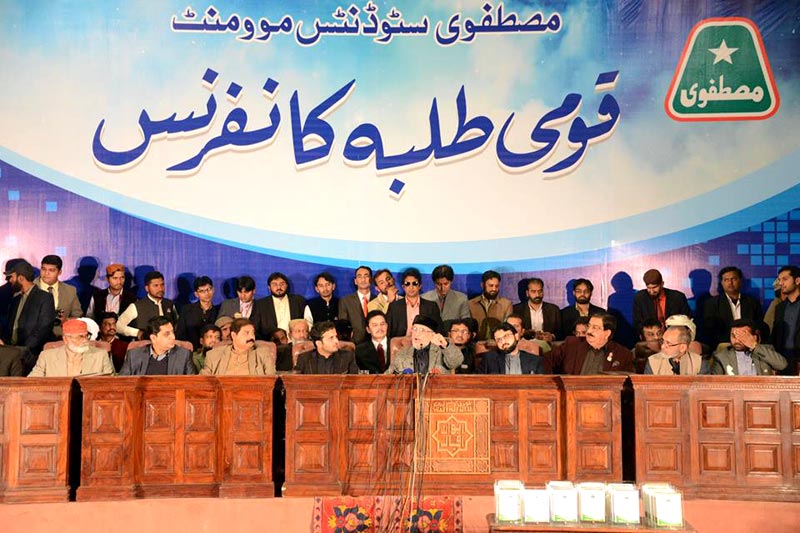 In his keynote address to the participants of the National Students Conference, Dr Muhammad Tahir-ul-Qadri said that the rulers are hindering the administration of justice in the Model Town case, asking whether they want the repeat of the Islamabad episode. He said that he always taught the students to be peaceful. Otherwise those who perpetrated the Model Town tragedy would have been held accountable by now. He said that the FIR of Model Town tragedy was registered on the pressure of the Army Chief. He said that what to speak of provision of justice, the family members of the martyrs were nominated as accused.

Dr Qadri said that armed terrorism would not end from the country without eliminating political, economic, legal and ideological terrorism. He demanded that the case of Model Town tragedy should be heard in the military court. He asked as to what system is this in which the powerful people go on a pilgrimage after committing sin and hire the services of a judge after committing heinous crime such as murder. He said that the Quaid-e-Azam said that the students are architect of the nation but the corrupt system is making them suicide bombers. He said that our struggle against terrorism has neither stopped nor will it stop, adding that this caravan of revolution will certainly reach its destination.

When youth are not given required guidance, nefarious elements use them for their interests. #MSMStudentsConference pic.twitter.com/Xl951Qj8ax

Dr Tahir-ul-Qadri said that 25 million children are out of school but the national resources are being squandered on luxurious projects such as train projects. He said that national assets are being looted in the name of privatization through front men. He asked whether millions of families rendered sacrifices for select families of the powerful. He said that from police to Election Commission, every institution is involved in political, electoral terrorism. He said that if Rs. 300 million will be spent on election process for every slot of MNA and MPA, how will the educated people earning lawful livelihood be able to become part of political process?

The PAT Chairman asked the male and female students to start decisive struggle against ignorance, extremism, corruption and terrorism. He said that in order to make Zarb-e-Azb successful, the launch of Zarb-e-Amn and knowledge is inevitable. He announced to initiate campaigns for promotion of peace and knowledge on the occasion. He said that it is his message to the students that they should support the armed forces in their struggle against terrorism and extremism. He said that prayer for success of Operation Zarb-e-Azb is the most granted prayer.

Dr Tahir-ul-Qadri further said that the rulers will be ready to have three new provinces created for the sake of power and they would accept Punjab by naming it as Pakistan. He asked as to why the Punjab Chief Minister accompanies the PM on every official tour. He said that these are not official tours but family business trips. He said that the PM says that electricity crunch will be over after two and half years, further stating that he knows full well that he would not be in power by that time. He said that the rulers were reminded of the Youth Policy as the elections hovered over the head. He asked the media and the youth to ask the rulers as to where the Youth Policy is? He said that those who announced package of Rs. 2.5 billion for Lodhran disappeared along with the package after electoral defeat in NA-154.

Severely criticizing tax amnesty scheme of the Government, Dr Tahir-ul-Qadri said that the governments generally take steps to eliminate black money but the present government is churning out plans to whiten the black money. He said that 35% of the youth, who are entitled to 114 seats in Parliament, are being comforted through provision of such lollypops as laptops and solar lamps. He said that law of free and compulsory education has not been implemented despite passage of five years, whereas the law is being passed to further empower the economic terrorists by allowing them to whiten the black money.

The students chanted ‘Go Nawaz Go’ slogans during the speech of Dr Tahir-ul-Qadri. 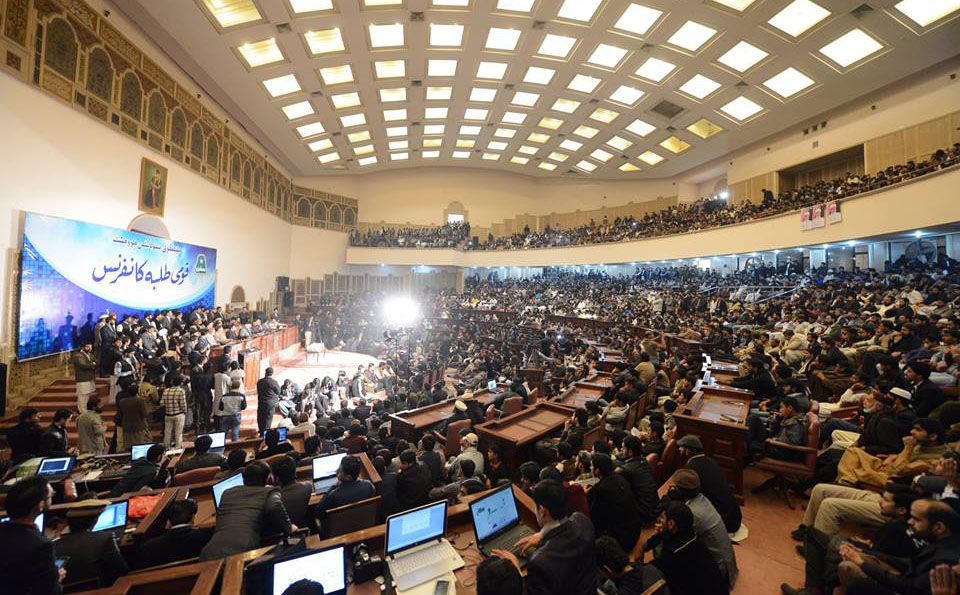 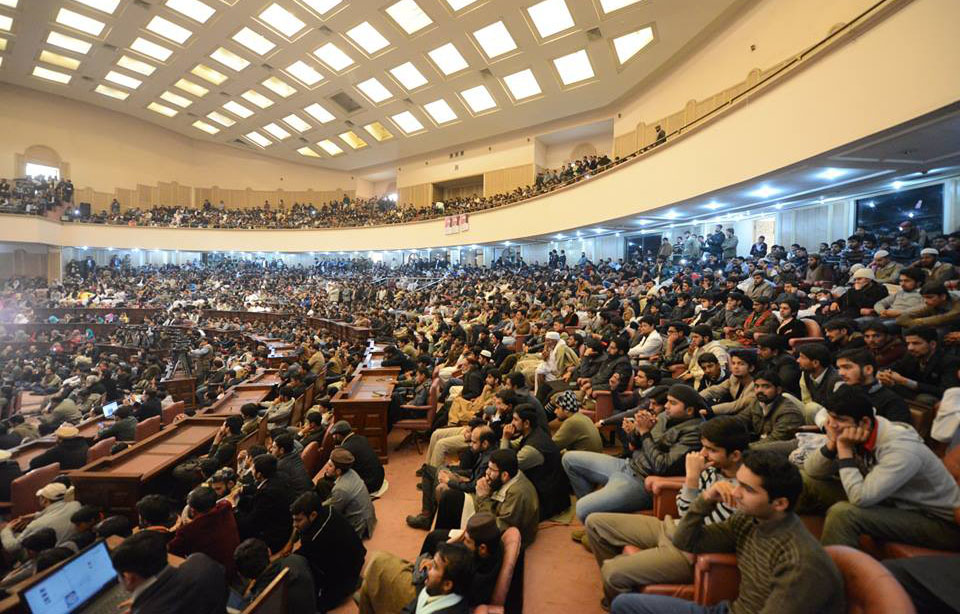 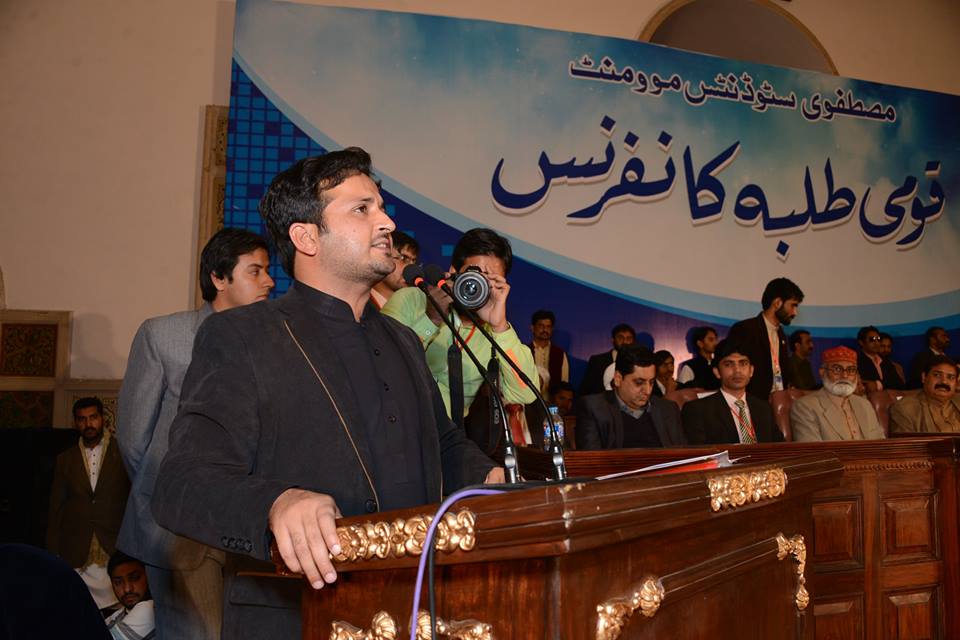 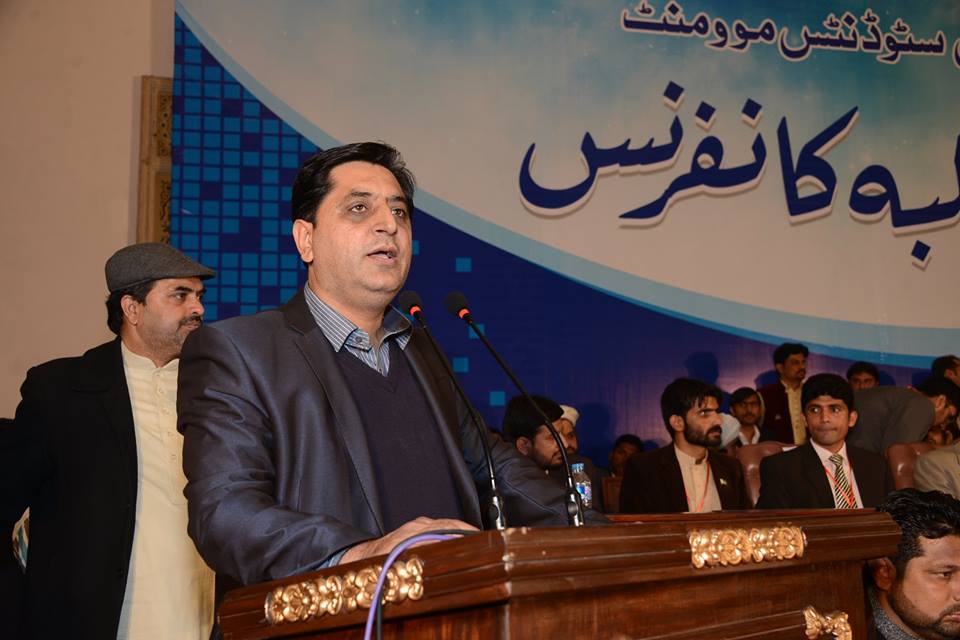 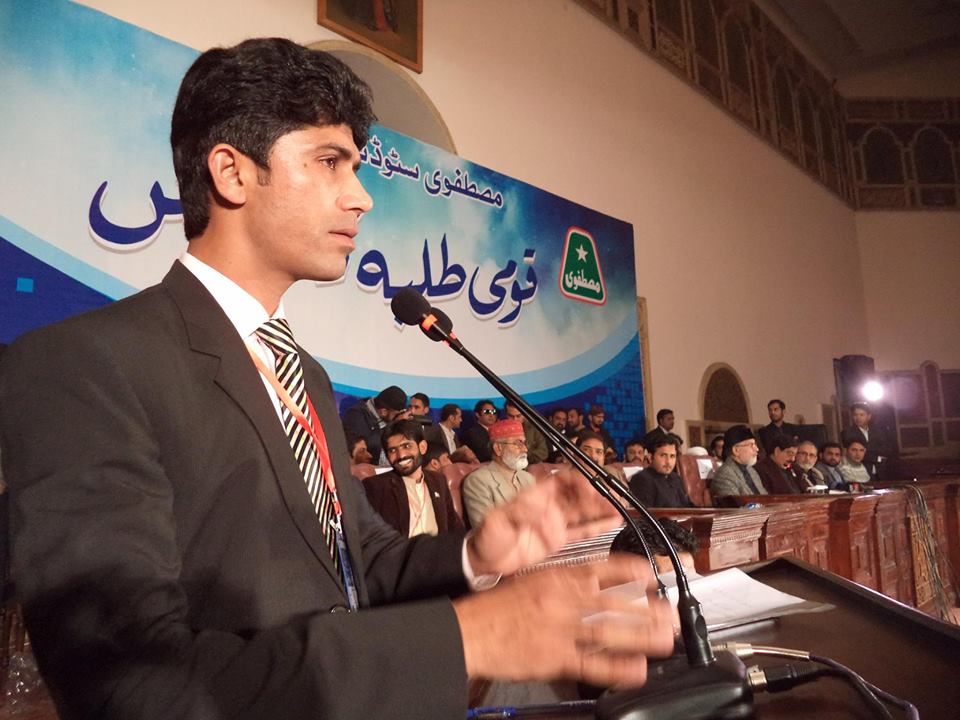 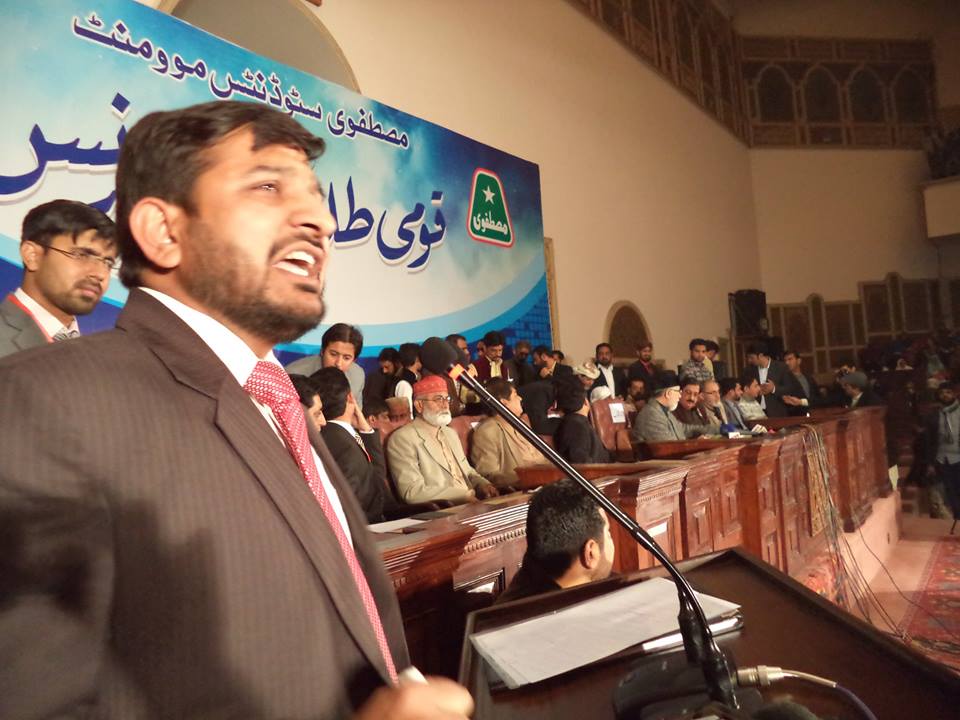 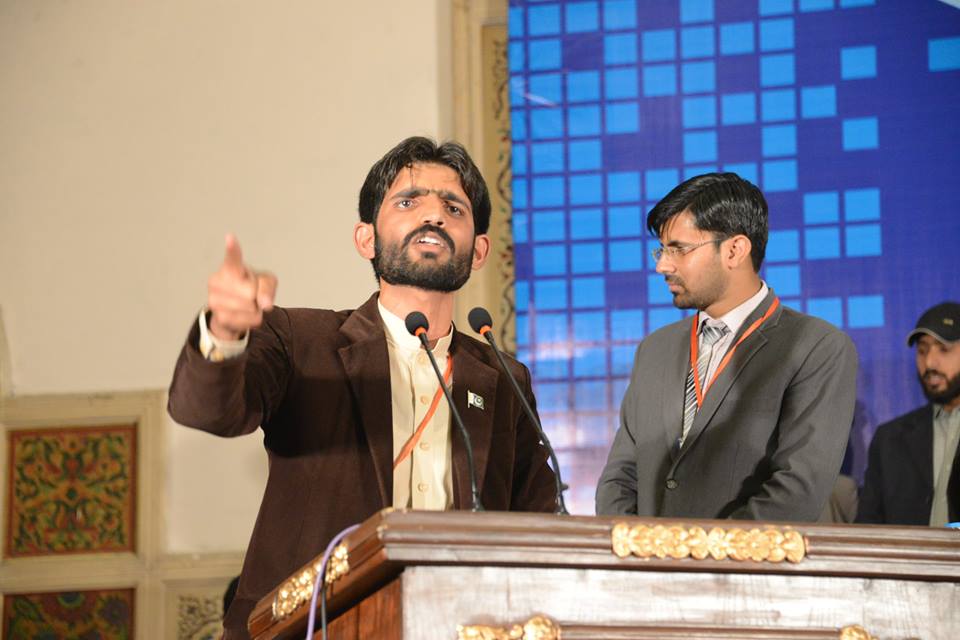 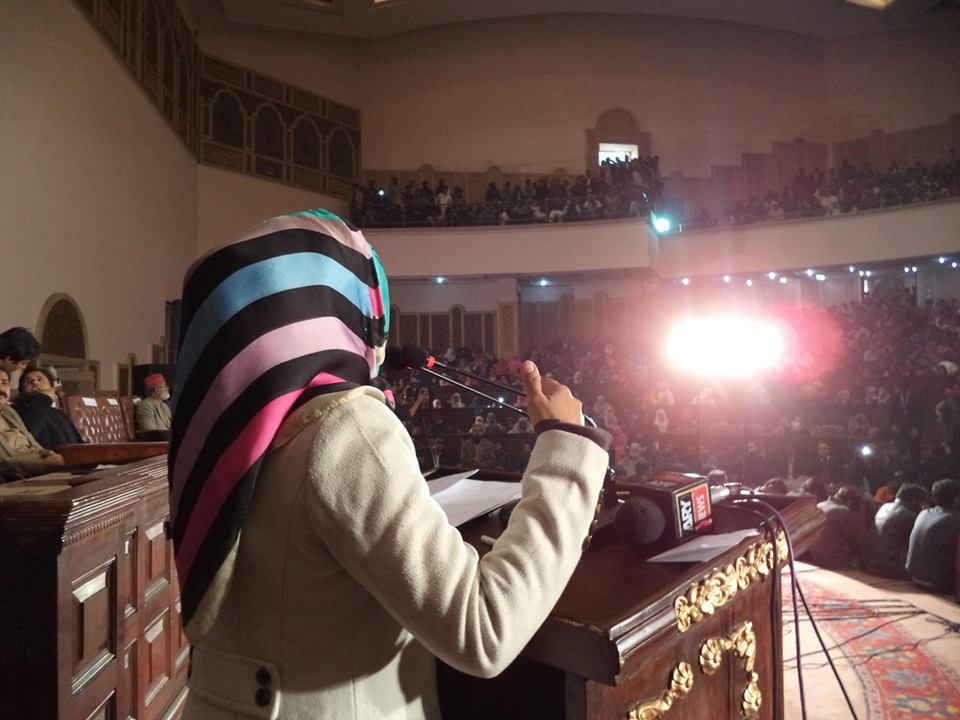 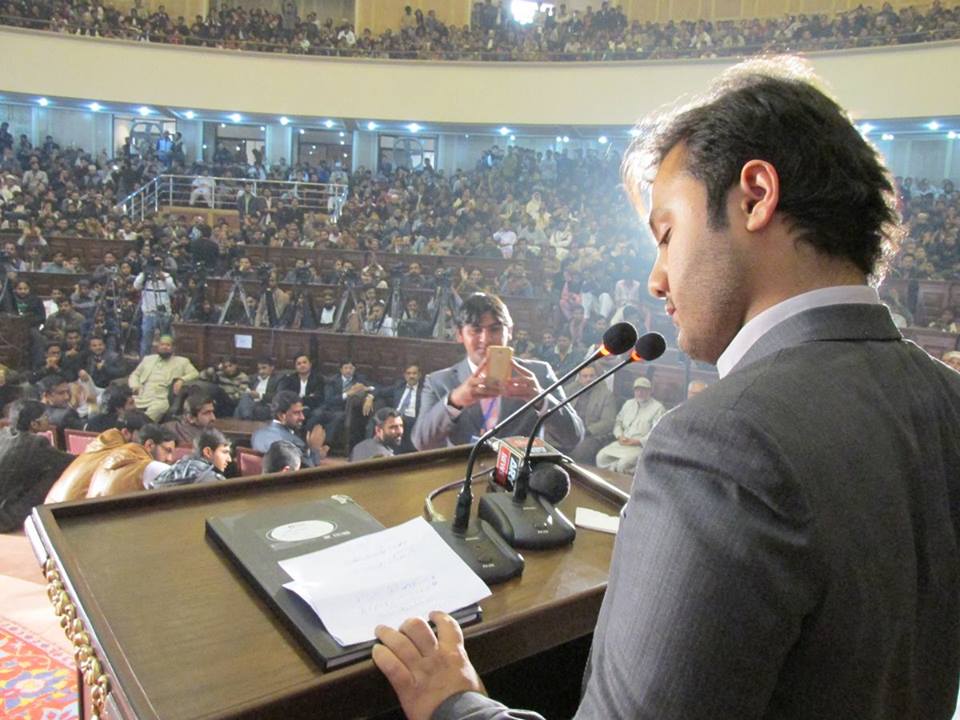 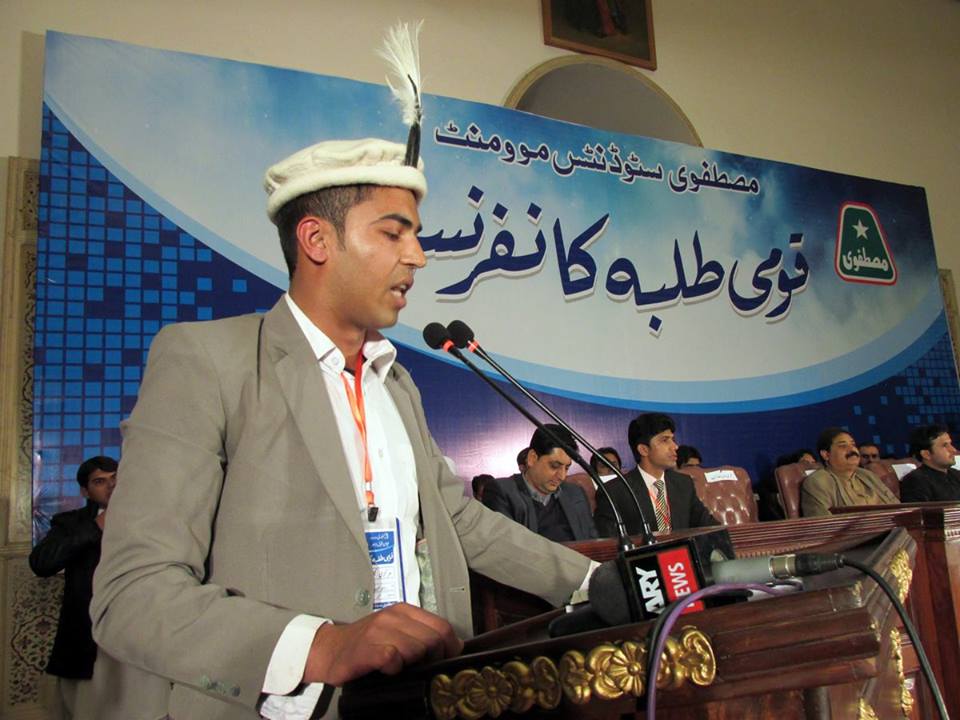 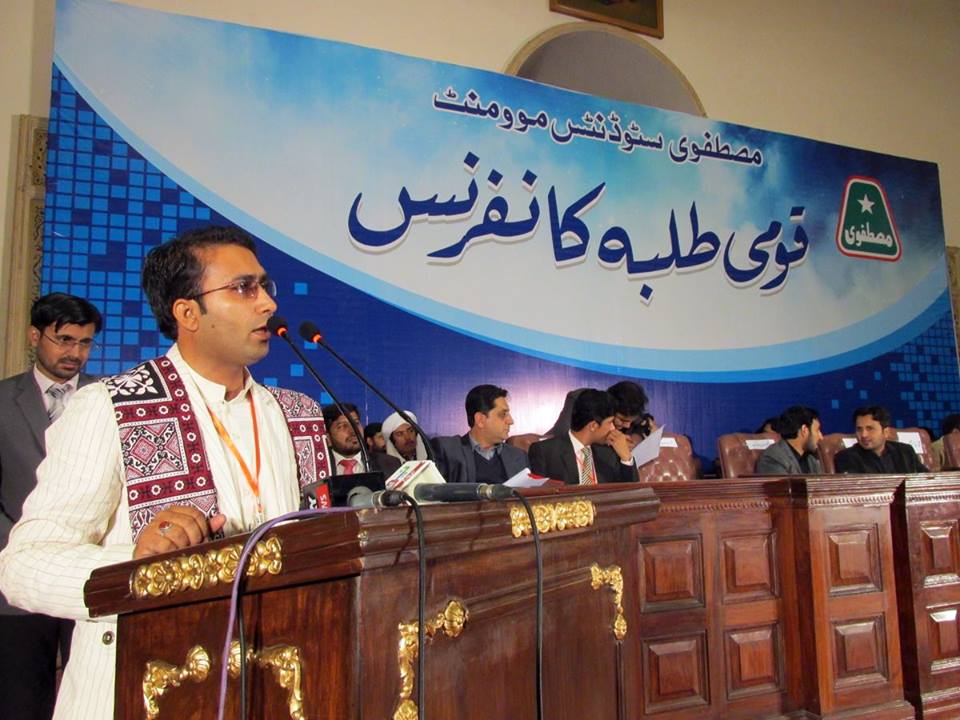 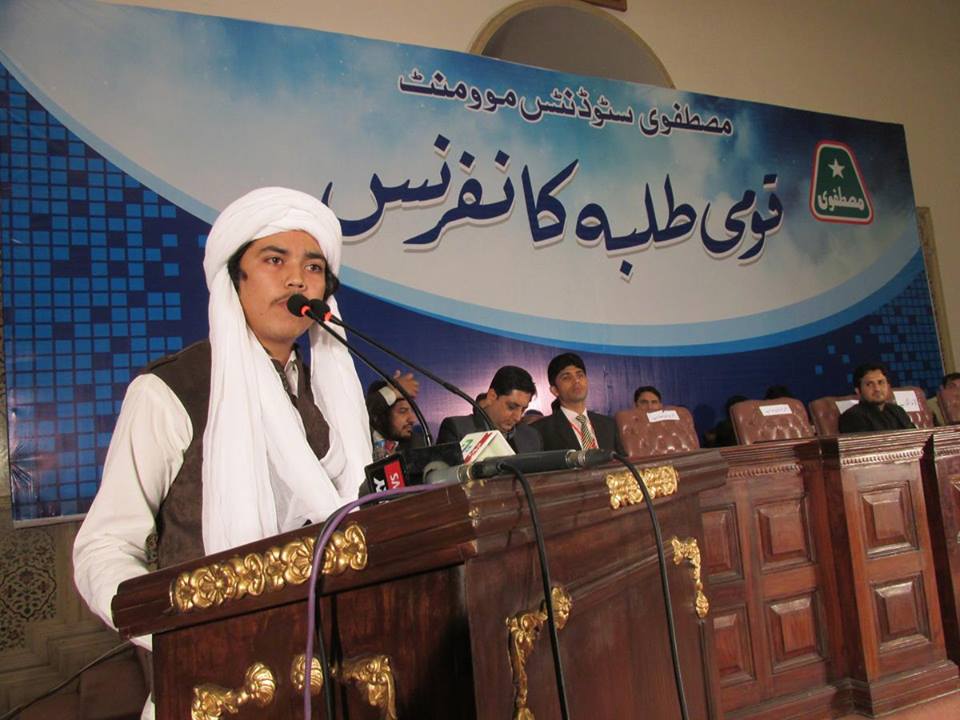 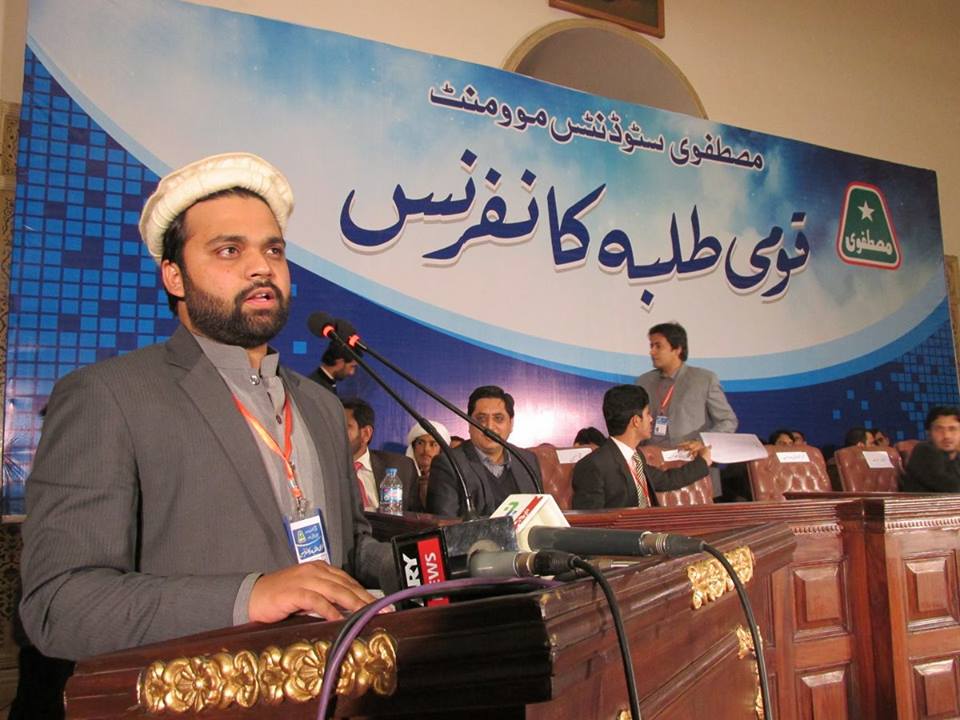 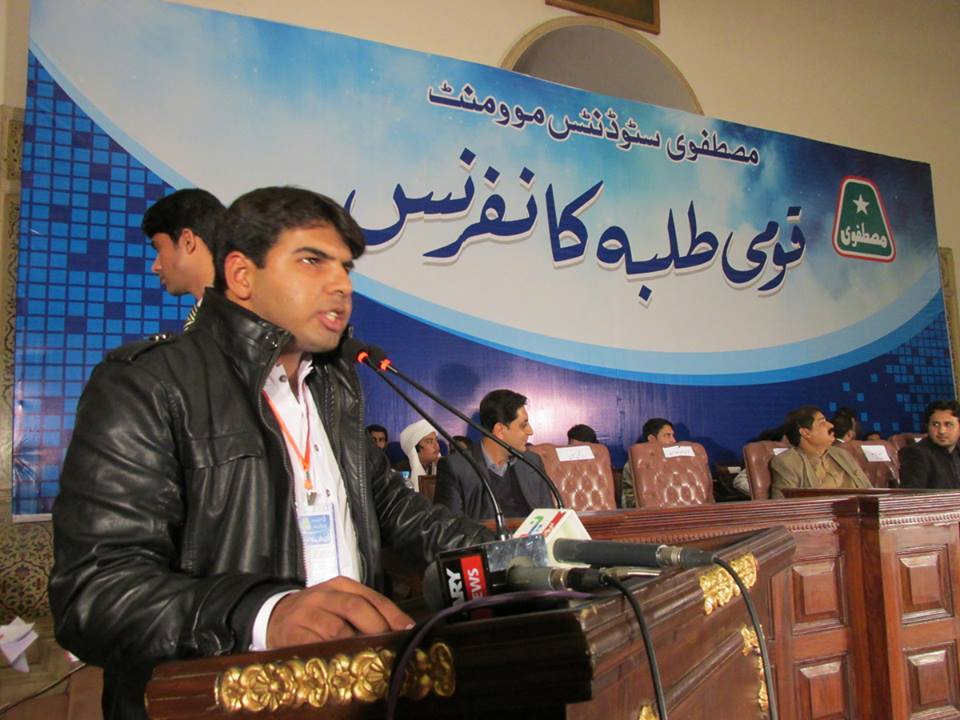 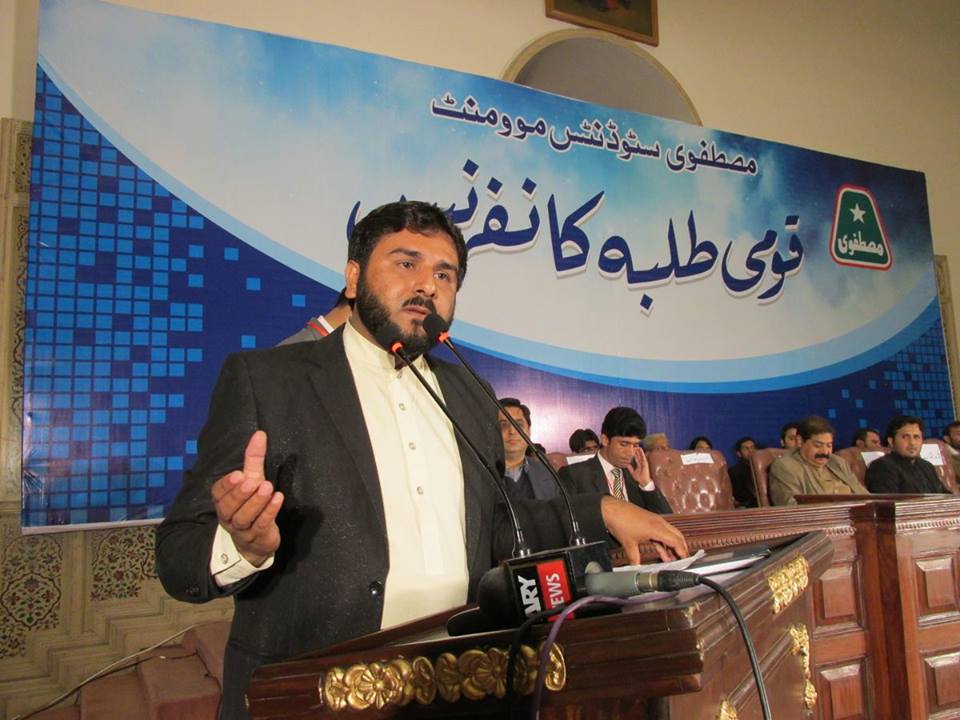 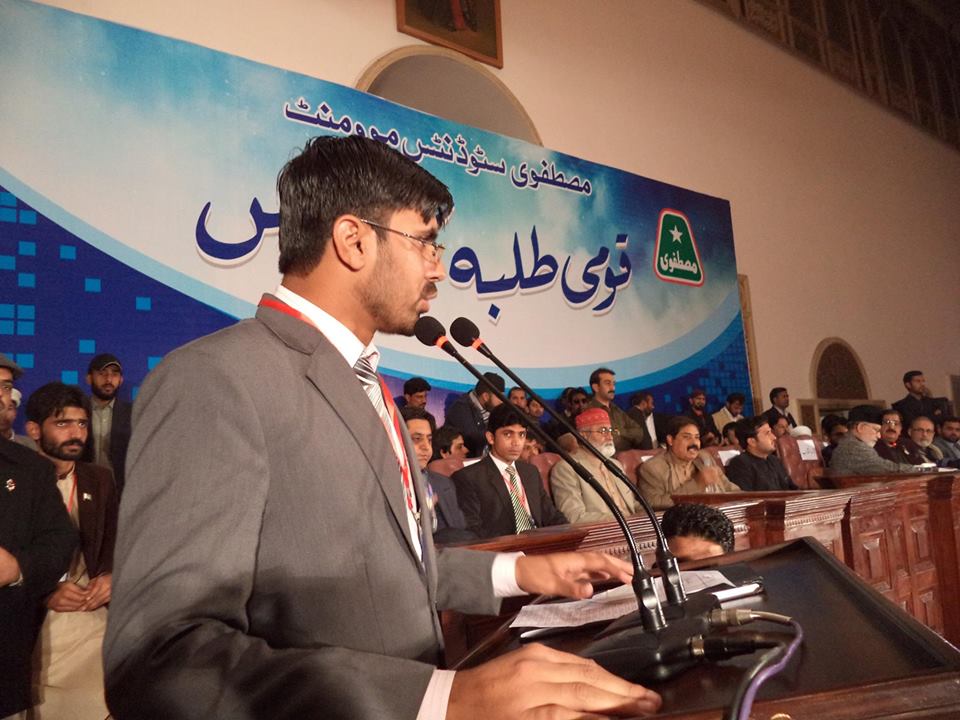 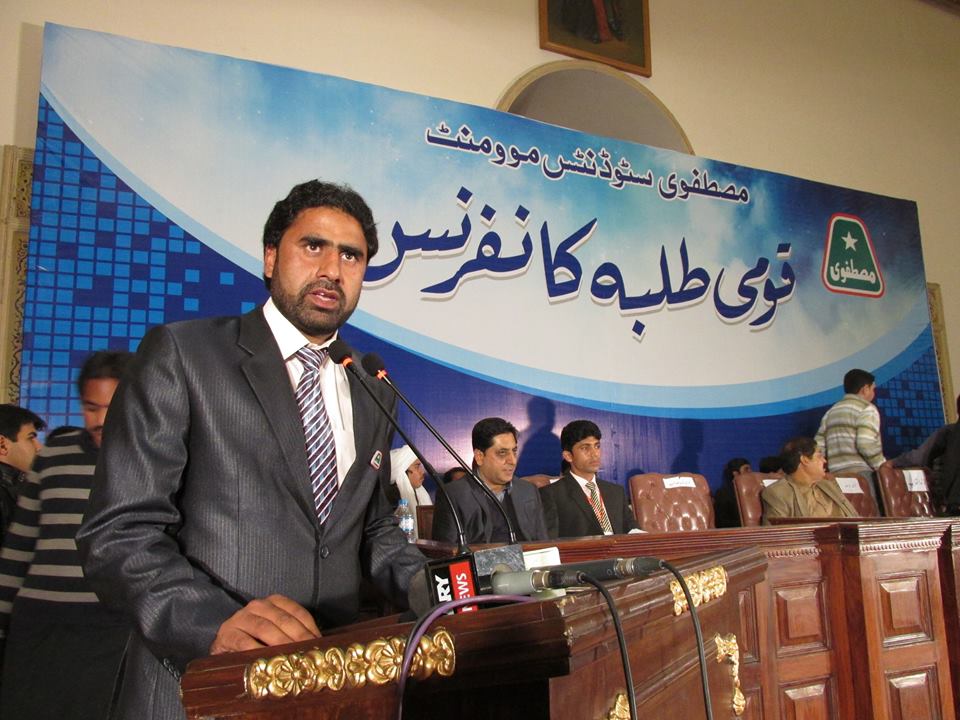 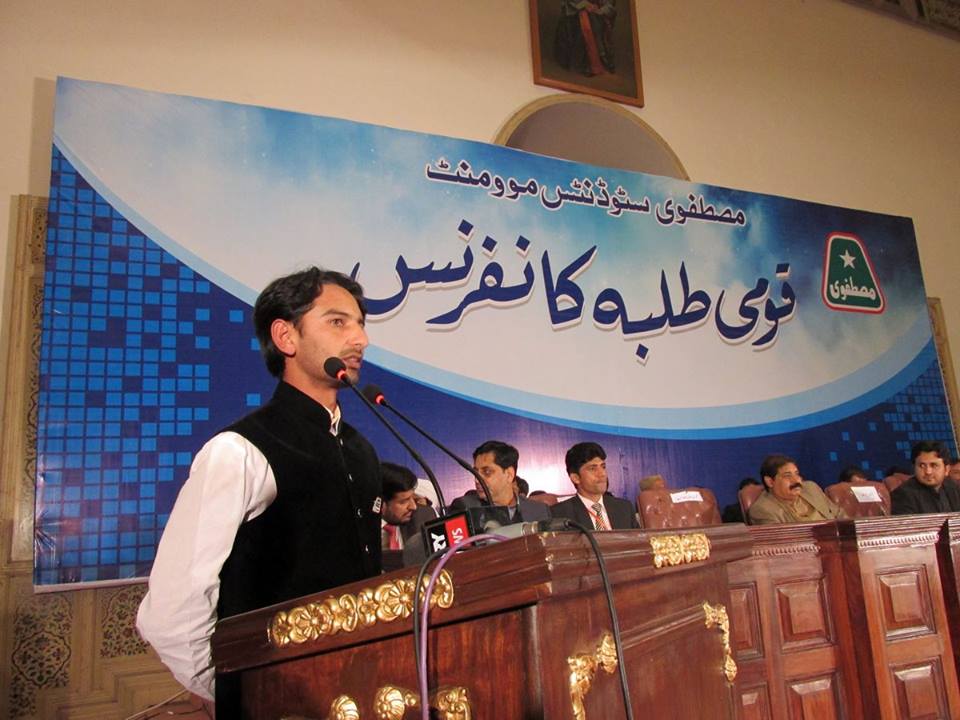 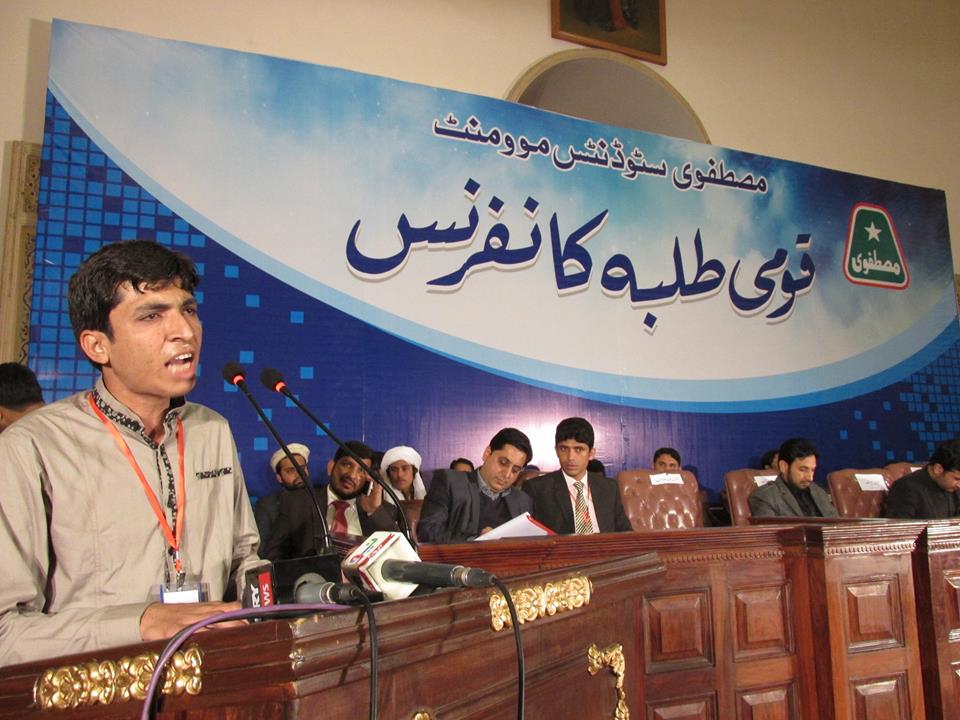 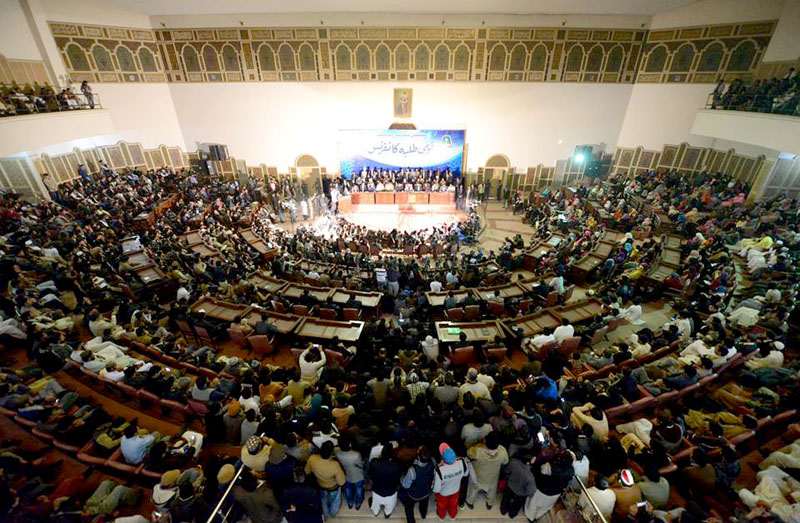