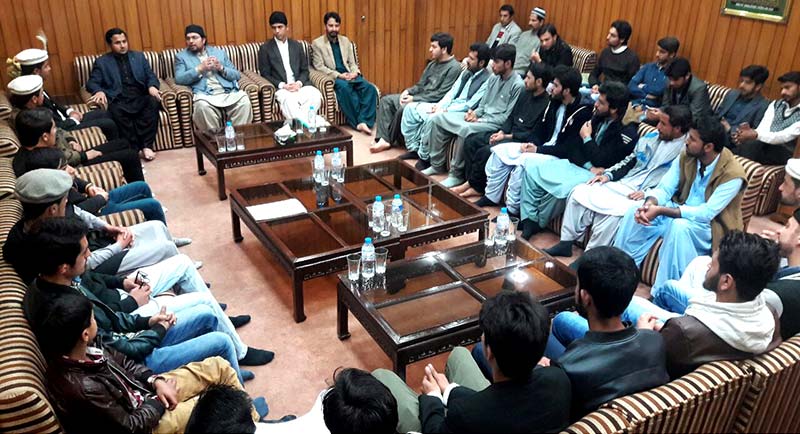 Students belonging to Gilgit-Baltistan called on President of MQI Dr Hussain Mohi-ud-Din Qadri the other day and discussed with him matters of mutual interest.

The delegation of the students was led by MSM President Ch Irfan Yousaf. Rana Tajjamal and Ahsan Ayaz were also present on the occasion.

The students of GB expressed their pleasure on the fact that Dr Tahir-ul-Qadri established great educational institutions in the far-flung areas to promote knowledge and literacy. He lauded the blending of academic education with moral training. They said that the people of GB are appreciative of Dr Tahir-ul-Qadri for highlighting the peaceful face of Islam in the world.

Talking to the students, Dr Hussain Mohid-ud-Din Qadri said that the PAT Chairman has played his lead role in promoting knowledge, peace and fostering a culture of research. He said that the MQI is a movement aimed at promoting peaceful and moderate face of Islam through knowledge and research. He said that Dr Qadri has engaged in relentless struggle to make the country the hub of peace through establishment of justice and elimination of sectarianism.

Raja Haseeb, who led the delegation, while talking on the occasion, said that the people of GB want to learn about the benefits envisaged in the CPEC for the region. He said that the rulers made tall promises with the people at the time of election and we await their implementation. He said that it is our demanded that we should be considered as Pakistani and the number of educational institutions should be increased in the area.

The students participated in the one-month long training workshop under the banner of MSM. They were imparted lessons in English, Urdu, and computer.