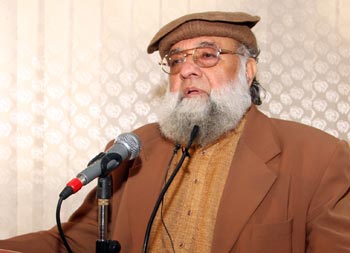 Allama Faiz-ur-Rehman Durrani, Amir of Minhaj-ul-Quran International, has said that our wrongdoings as a nation are the reason of Allah’s displeasure with us and it explains why terrorism, lawlessness, killings, economic worries, target killings, energy crisis and unjust distribution of wealth have become defining characteristics of our national life. He said that shedding of blood everywhere is proof of the fact that our hearts are more hardened than stones.

The MQI Amir expressed these views while addressing a big Friday congregation at central Minhaj-ul-Quran Mosque on December 5. He said that a Muslim is a protector of life, honor and property of other Muslim, adding that our actions are contrary to manifest teachings of the faith and it is for this reason that we have become deprived of Allah’s mercy. He, however, added in the same breath that if our society is still safe from major tragedies and catastrophes, it is due to presence of Allah’s pious people. He said that if we did not reform our conduct, Allah Almighty may turn away from us. He said that it is about time the whole nation sought collective penance for its wrongdoings.

Allama Faiz-ur-Rehman Durrani said that dominance of materialism has snatched the religious values from us and rendered us into material creatures. He said that if we want to have peace and happiness in our lives, we would have to return to spiritualism and forge attitude of human brotherhood in society.

He also led a special prayer for recovery of Dr Tahir-ul-Qadri’s health on the occasion.