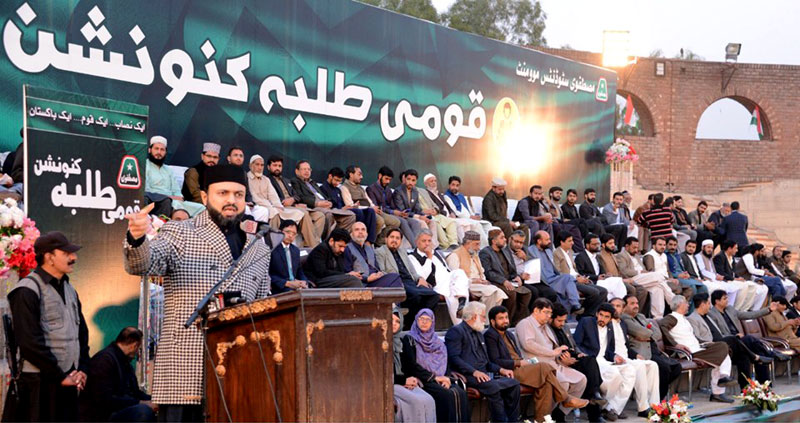 Addressing National Students Convention in Al-Hamrah Cultural Complex near Qaddafi Stadium on December 1, Chairman MQI Supreme Council Dr Hassan Mohi-ud-Din Qadri has said twenty-two educational policies were made from 1947 to date and all of them have proved to be a failure. He said curriculum in one language will have to be designed to achieve the objective of one nation, one country. He said there is no country including China, USA, Japan and Germany that has progress by imparting education in a foreign language. He said the ruling elite that is bent on imposing a foreign language on the country is responsible for pushing the country into the Stone Age. He said Urdu is one of 20 languages that are powerful, robust and growing. He said the judicial decision of making Urdu the official language of the country was thrown into the dustbin.

Dr Hassan Mohi-ud-Din Qadri congratulated MSM president Irfan Yousaf and his entire team on the successful conduct of the National Students Convention under the slogan of the students’ rights, one language, uniform curriculum, and one Pakistan. He also warmly welcomed the student delegates from all the four provinces.

Dr Hassan Mohi-ud-Din Qadri said the literacy rate in Pakistan at the time of independence was 11%. He said had it improved by 1% annually, it would have been 83% by now. He said Pakistan is the only country in entire South Asia that spends the minimum of its GDP on education. He said the high-sounding slogans of educated Pakistan will be turned into reality through practical steps, not statements. He said if those at the helm of the affairs want that our educational institutions start producing personalities such as that of Rumi, Ghazali, Iqbal and Quaid-i-Azam, then we will have to adopt the path of one language and one curriculum. He said 25 million children do not go to schools in Pakistan, wondering how those responsible for running the state of affairs can sleep peacefully. He said due to negligence of the state, the educational expenditure per student has increased by 150% with the result that higher education has gone beyond the reach of the children of poor families.

Chairman MQI Supreme Council said the children who were to become doctors, scientists and engineers are forced to become plumbers, technicians due to heavy and unaffordable fees and the oppression of circumstances. He said every person who was given the responsibility to run the affairs of the state in their domain is responsible for this sad saga. He asked what answer the rulers who turned the sacred profession of education into a profitable business will give to Allah. He said Sri Lanka and Afghanistan spend 3.5% and 3.2% of GDP on education respectively, whereas Pakistan merely spends 2.4%, which is a matter of immense shame. He said the literacy rate in Sri Lanka is 91%. He said it was planned in 2008 that 1000 students will be sent abroad for Ph.D. but added in the same breath that the figure could not exceed beyond 250. He asked as to why the rulers who built luxurious palaces abroad did not build universities and educational institutions?

Dr Hassan further said that Dr Tahir-ul-Qadri gave the vision of 'education for all' and under this concept, he established over 600 model schools for the low-income and poor segments of the society across the country under the banner of Minhaj Education Society where hundreds of thousands of children are getting an education. He said due to the high quality of instruction of the students of Minhaj schools get top positions every year in different board examinations. He said the MQI leader set up universities and colleges of international standards that are busy imparting education to the sons and daughters of the nation. He said COSIS has blended the teaching in Islamic and contemporary sciences and the graduates of this College are not only religious scholars but also Islamic economists and IT experts.

Dr Hassan Mohi-ud-Din Qadri said the education system of Pakistan needs to be overhauled, which necessitates the provision of rights to the students and allocation of sufficient resources. He said the Pakistani students are hugely talented, stating we need to repose our confidence in their abilities as they are the future of the nation and guarantor of its progress. Addressing the current rulers, he said if they want to found the State of Madina, then they must devote resources to the promotion of education. He said shiny roads and infrastructure are destroyed after some time but the investment done on the education and character building of a people continues to bear fruit and becomes a bedrock of progress.

PAT Secretary General Khurram Nawaz Gandapur said in his speech that the entire MSM deserves to be congratulated on the successful holding of the National Students Convention. He said today's Convocation has proven that MSM is the only representative organization of the students. He said the student body's struggle for the cause of education is worthy of emulation.

Central president MSM Irfan Yousaf said in his speech that the forces inimical to the Ideology of Pakistan are spewing venom against the national institutions in the garb of the students’ rights. He asked as to why the national institutions are allowing such vested interests to operate freely with the anti-national agenda. He said Mustafavi revolution is the destiny of Pakistan. He said the students belonging to MSM are a shield against the ideological miscreants. He demanded the imposition of a uniform system of education in the Urdu language. The slogans of one system, one curriculum, and the revolution continued to reverberate the hall.

President of MSM Sindh chapter Ali Qureshi spoke in the Sindhi language and emphasized that the youth are being exploited. He said unless the system was changed, nothing else would change. Mir Ahsan Mir, president MSM Azad Kashmir, thanked the students for making a human chain to express solidarity with Kashmiris President MSM South Punjab Imran Yousaf delivered in his speech in Saraiki language and said we would take the struggle of educated Pakistan to its logical conclusion according to the vision of Dr Tahir-ul-Qadri.