A week After the Peace for Humanity Conference

So now that the dust is settling on the great conference of a week ago, accompanied with a barrage of local, national and international media coverage, the question that everyone is asking is how significant was the conference in shaping the future of Islam and Muslims and the relationship between Islam and the West.

To start off with, Wembley Arena was clearly packed with 11,000 people who had all purchased tickets for the event and had travelled from across the UK. This comes to the first point which is after the launch of the fatwa, critics remarked that the views expressed by Shaykh-ul-Islam Dr Muhammad Tahir-ul-Qadri did not have support amongst mainstream Muslims or there was no evidence of that in the UK. Although his annual Mawlid lecture in Pakistan attracts around a million people, and his Urdu lectures in the UK also result in packed venues such as the Madani Mosque, Bradford earlier this year, this was the first such event to be conducted in English. The result of course proves not only do British Muslims share the anti extremist position but also back the stance taken by Shaykh-ul-Islam in his presentation of Islam. It also proves that British Muslim youth and Muslims at large are fully behind Shaykh-ul-Islam. The 11,000 in Wembley Arena were not the only participants of the conference but millions around the world were viewing the conference live on the QTV channel with particular interest from the UK where the conference was extensively publicised and the Indian sub continent where the TV channel is based. QTV is part of the ARY network which extensively publicised the conference and the live broadcast. This helped take the message to millions of homes.

Beside the live TV coverage of the conference, the tsunami of media coverage ensured that the message of the conference was conveyed to all irrespective of religion and background. Whether it be live reports on BBC News or Radio 4 or reports on Sky News and national and local newspapers, it was clear that the message of the conference and the keynote speaker received blanket coverage. This fulfilled the dream of Muslims who have been upset about extremists receiving media coverage and in doing so representing Islam. This began with the launch of the Fatwa after which extremists were knocked off mainstream media following an appeal by Shaykh-ul-Islam to the media to give a voice to the mainstream Muslims and not the extremists who have no support what so ever. This conference is a final step in the work of Shaykh-ul-Islam in making sure only the true representatives of Islam are given the deserved media coverage and in doing so side-lining extremists from the media. The world now know what the true Iislam is all about and who the true representatives of the faith are. 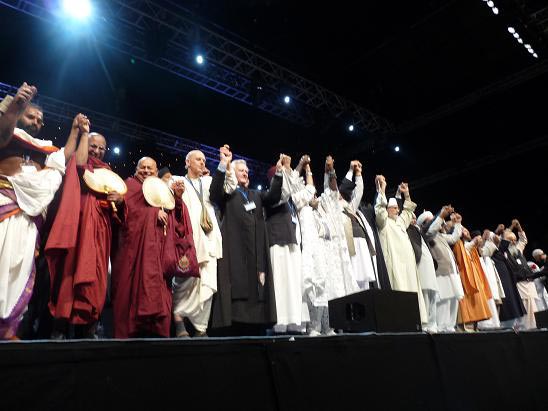 The blanket media coverage also made the Islamic position on interfaith relations clear to everyone. Leaders from all religions prayed for peace according to their own religions and also showed to everyone how all religions can live side by side with peace and love. These activities at the conference were fully based on the teachings of the Holy Prophet Muhammad SAW when he SAW allowed a delegation of Christians to worship according to their own religion in Masjid Nabawi. This of course is referenced in classical books of Hadith and seerah (1). The Prophet SAW also served a delegation of Christians from Abyssinia with his own hands with food and other needs. The point to note is that when the Christian delegation was permitted by the Holy Prophet SAW to Worship in Masjid Nabawi, that entailed worshipping Jesus and the Cross, as the Quran states that Christians at that time believed in Trinity and in Jesus being god. Those who may not be aware of this hadith of the Prophet SAW may be prone to shirk attacks, but hopefully with a jab of the above lecture clip containing fully referenced hadiths their immune systems will be able to fight off such shirk attacks in the future. It is the responsibility of scholars to teach their followers such points from the life of the Prophet SAW. True scholars can never belittle such things as they have cognition of the teachings of the prophet SAW on these matters, whereas half baked scholars or self confessed ones cause confusion due to their selective understanding of the Seerah. The conference was of course attended by great Islamic scholars from around the world and the UK, who also took part in these interfaith proceedings.

Scholars united behind the cause

The conference was attended by great scholars from around the world from various backgrounds. This included the Shuyukh from Al Azhar University Cairo Egypt, which is seen as the greatest seat of learning. Great Mashaikh from Pakistan and those based in the UK also spoke at the conference. Their support for the conference renders obsolete solitary voices who may want to oppose it. Mufakkir al-Islam Shaykh al-Sayyid Dr. Abdul-Qadir Shah al-Jilani, leader of Markazi Ahl al-Sunna wal-Jama`a organisation, came to the conference alongside senior members of his organisation. Shaykh Muhammad Amin-ul-Hasanat Shah al-Qurashi son of the the great Justice Pir Muhammad Karam Shah al-Azhari (RA) spoke to the conference in Arabic. Shaykh Sultan Fiaz al-Hassan Sarwari al-Qadri the descendent of the great saint Sultan al-Arifin Sakhi Sultan Bahu (RA) attended the conference with his brother and followers. Shaykh al-Sayyid Muhammad Yahya al-Ninowy from the USA originally from Syria also blessed the conference with his talk.

There was also support for the conference from many great scholars from around the world who were not able to attend the conference. They include Shaykh al Azhar, Professor Dr. Muhammad Ahmed al-Tayyib Grand Imam of Al-Azhar University and Imam Zaid Shakir, Co-founder, Zaytuna College, U.S.A.

Many scholars and imams of mosques from across the UK attended the conference, all of whom of course could not be seated on the stage but were in the VVIP seating area.

This conference brought together many great scholars from around the world, to unite in order to safeguard the great Merciful status of the Holy Prophet Muhammad SAW. The coming together of all these scholars shows that when it comes to protecting the name of the Prophet SAW and the peaceful faith of Islam, differences must be put aside and the power of unity must be utilised. This unity ensured the success of the conference. The same conduct should be followed by all Muslims no matter which background they may belong to, the wider aims of the conference should be kept in mind. Otherwise the unanimous acceptance of this conference will hold solitary voices to account.

Finally, The London Declaration for Global Peace & Resistance against Extremism 2011 was unanimously agreed upon by all delegates at the conference and is currently open for signatures.