Mustafavi Students Movement (MSM), student wing of Minhaj-ul-Quran International, held a protest demonstration against the desecration of shrines of Sayyida Zaynab (RA) and Hazrat Khalid Bin Waleed (RA) in Liberty Chowk, Lahore today. The participating students, who belonged to different colleges and universities of Lahore, were carrying placards and banners with anti-desecration slogans written on them. They asked the UN, OIC and the government of Syria to take a strict action against those involved in the attacks on the shrines of the revered personalities of Islam. 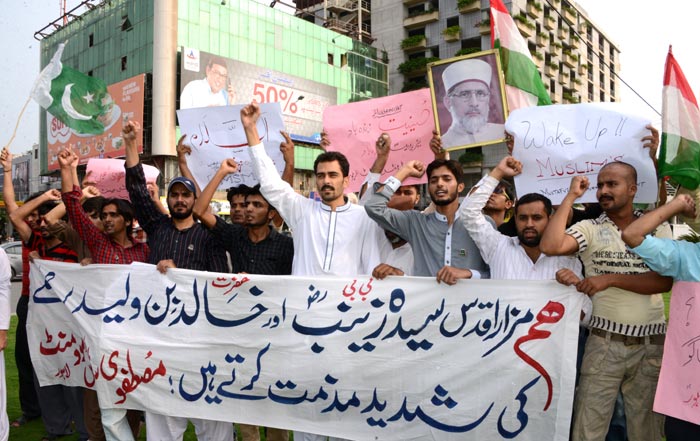 Addressing the demonstration, Rana Raheel Javed, central President of MSM, said that desecration of shrines of Sayyida Zaynab (RA) and Hazrat Khalid bin Waleed (RA), grand-daughter and Companion of the Holy Prophet respectively, was a slap on the collective conscience of the Muslim Ummah. He said that the so-called leaders of the Umma were bereft of a thing called conscience, adding that it was futile exercise to expect anything from them in this regard.

Rana Raheel Javed said that the attacks on the shrines of the distinguished personalities of Islam constituted great tragedy in the Islamic history, which had injured the religious sentiments of the Muslims the world over. He demanded of the government of Syria to apprehend those involved in these horrible crimes at the earliest and mete out an exemplary punishment so that none should dare do such a thing again.

Speaking to the participants of the protest demonstrations, Razi Tahir, secretary Information of MSM, said that the Companions and Prophet’s Household wanted to knit the Muslims in a thread of mutual love, respect, harmony and understanding. He said that if some elements sought to sow divisions among the Muslims in the name of holy personages, they were neither loyal to Muslims not Islam. He said that personalities such as Sayyida Bibi Zaynab (RA) and Hazrat Khalid Bin Waleed (RA) were a metaphor of pride for the humanity who inculcated among it the values of truthfulness, human dignity and freedom and chivalry. He said that the Muslims’ heads were hung in shame at the desecration of shrines of such exalted personalities of Islam.

The Secretary Information of MSM urged the need of effective measures including formulation of stringent legal frameworks to stem recurrence of such incidents. He said that given the prevailing state of affairs in the large swathes of the Muslim Umma particularly in Afghanistan and Syria, there was a dire need of the fact that the Muslims woke up from their slumber and forged unity in their ranks to establish peace and put an end to violent activities in their lands.