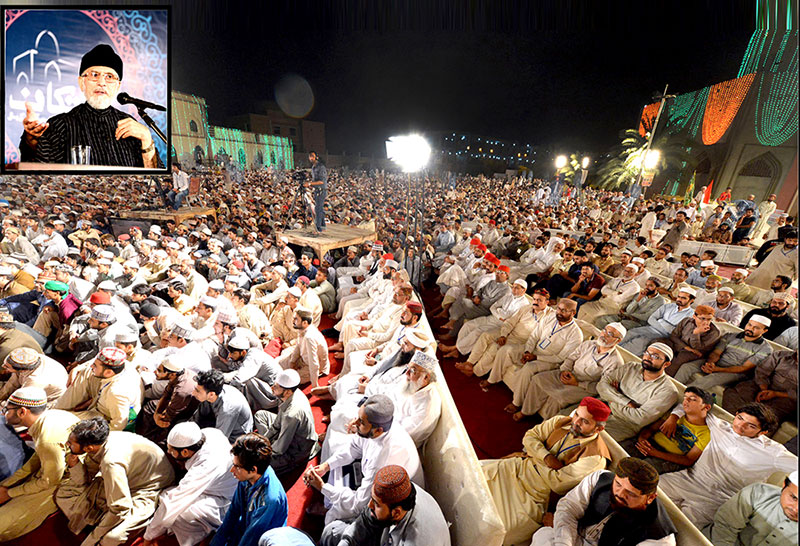 The 25th edition of annual Itikaf continues with full religious fervor and spiritual ecstasy at Jamia Al-Minhaj Township Lahore. The chief highlight of these spiritual retreats has been the scholarly and wisdom laden addresses of Shaykh-ul-Islam Dr Muhammad Tahir-ul-Qadri that have covered variety of subjects with their freshness and depth staying intact over the years. These erudite speeches have enlightened the faithful guiding them on issues and challenges that have direct bearing on their life.

On the 22nd of Ramazan, Dr Tahir-ul-Qadri chose the subject of moral and spiritual training. He said that the Holy Quran described the Holy Prophet’s conduct as the perfect and hence an ideal for the faithful. He said that every aspect of the Prophet’s life (SAW) and his treatment of people irrespective of any discrimination is a manifestation of his excellent morality. He said that a follower who finds fault with the personality of the beloved Prophet (peace and blessings be upon him) does not deserve to be called a follower.

Dr Tahir-ul-Qadri said that the human morality is infinite as every aspect of life, personality, every word and act, conduct and behavior of every kind is part of morality. He said that he whose character and morality is finer and excellent is as much deserving of privilege in the eyes of Allah.

Dr Qadri said that only those extend their reverence to the person of the Holy Prophet (peace and blessings be upon him) in whose hearts the plant of piety grows. He said that the sign of piety is that a man returns the bad deed with good one, adding that this is the highest point of piety. He said that there is enough power in the idea of piety that it can drive out the evil.

Shaykh-ul-Islam’s address started at 11.30 pm after ‘Tarawih’ prayers, which was broadcast live via minhaj.tv and facebook streaming.